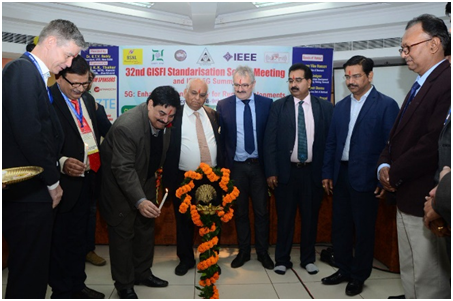 GISFI Vision: To be an ICT standards forum in India, which develops standards to meet the Indian requirements, as well as contributes towards the evolution of global standards.
The 32nd GISFI Standardization Series Meeting (GSSM) jointly held with the IEEE 5G Summit under the theme 5G: Enhancing Connectivity for Rural Development to reflect on the joint long-term persistent endeavors to reveal the full potential of robust new wireless devices, communication techniques, networks, systems, and services to provide capabilities that will revolutionize the global wireless digital economy in the society.
Prof. Ramjee Prasad conceived the concept of a standardization body for India, which would represent the nation in totality, during his participation in a meeting together with Korean, Japanese and Chinese companies and other organizations of the various countries. Soon after realizing the imperativeness of such an entity for India’s growth in the knowledge based economy, Prof. Prasad proposed the matter to several major Indian companies and they agreed to the immediate need for such an initiative. Furthermore, the international companies and organizations also expressed that they face many difficulties in entering the Indian market. The underlying issue is fragmentation of the market, and due to this desperateness, the country has lost investment from a number of organizations. Formation of Global ICT Standardization Forum for India (GISFI) was publicly announced in Kolkata in December 2008. On this occasion, a workshop was hosted by Center for TeleInFrastruktur (CTIF)-India, where the initial core team was formed.
The members of GISFI consist of academics, policy makers, regulators and the industry. Thereafter, GISFI had its second workshop in March 2009, in SIT -Lonavala. During this workshop, GISFI’s concept and technical scope were discussed with the participants. The teams were formed and roadmaps were allocated to initiate the work behind the technical themes and registration of the forum.